How To Waste Your Life

Growing up is never easy; losing touch with people you love is worse. One of my best friends from PA and I don’t talk nearly as much as I’d like and I’m ashamed to say it’s been nearly four years since we last saw each other. Thankfully for me, he’s living a life of wanderlust that I greatly admire–and let’s be real, I’m greatly jealous of too–which means his latest journey has brought him to Charlotte for a weekend. This also means, I finally got the kick in the pants I needed to start exp

loring the city I’ve called home for two and a half years now.

When I began researching local museums I’d like to visit, this one was at the top of my list; I can’t even tell you why really, I guess something in me just likes planes–or maybe it’s the undertone of travel they inspire. Proving again that there was a reason (countless really) why we were so close, my friend had asked me to visit this very museum during his time here.

There is nothing glamorous about the museum honestly; it’s basically a giant one-room warehouse that has fifteen or so planes scattered around it with some information about that specific model and its place in history. But with the King of Travel at my side, nothing can ever be simple or run-of-the-mill. No, this day, in the center of the hangar was the “miracle on the Hudson” itself: US Airways Flight 1549, with special guest Dan Vinton, aka “Passenger 15E,” from the very crash.

Dan gave us an inside look on his experience, while humbly explaining that his story was less traumatic than others. Based on where each passenger sat, the episode varied significantly. From take-off to landing, they were in the air for less than six minutes but that felt like an eternity when the only information the captain provided after the passengers felt a seemingly small explosion and saw smoke from the engines was, “brace for impact.”

Without any other indication of what was happening, the passengers sent out frantic calls and texts to loved ones and made their peace with death. After the shock of surviving the landing sunk in, the fear of drowning on the river became a real threat. Dan explained how he tried to deploy the raft near the wing and immediately fell into the frigid water. A few members of his “family,” as he now refers to all of the passengers on the flight, (as well as the pilots, attendants, rescue workers, and air traffic controllers all involved in the incident) pulled him back onto the wing and built a human chain to deploy the raft and get everyone on their side of the plane off of the sinking vessel.

It wasn’t until he was on the rescue ferry that Dan finally believed he was going to survive the ordeal, or that he finally was able to feel the cold seep into his body from his soaking wet clothes. On board, he asked one of his fellow passengers to borrow his phone and called his wife. She had no idea anything had even happened as her husband wasn’t even meant to be on that flight. It wasn’t until hours later that Dan himself finally learned what even caused the accident to begin with, curtesy of local television news.

Dan painted an incredible picture of his experience that day and gave us his opinions on the film, how they are all coping afterward, what some have chosen to do with their lives as a result of the accident and more. 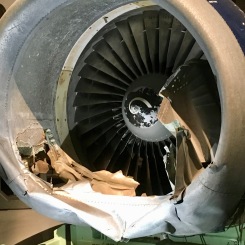 I had entered the talk not really knowing anything about the incident, which I later realized was because it occurred two days before my 21st birthday and to be quite honest, I was in a very self-centered stage of life. But I was instantly drawn into this moment of chaos through this very real, humble, and gracious person standing in front of me. I even found a connection to him in the smallest of ways when my friend leaned over to remind me that on one of our many excursions into the city, we had ridden on the same ferry that was navigated by the very captain who first arrived on scene to rescue these passengers.

It’s not really a connection at all, but it helped make the situation more real to me. We live in a world desensitized to chaos, so much so that when another plane crash happened, people were taking “plane crash selfies.” We don’t take to heart how serious things can be sometimes, but knowing that my feet were once on that same deck, that I had crossed that very river multiple times, gave me a completely new perspective on the scenario.

Truthfully, I don’t think I’ve had enough time to work through my feelings about all of this just yet, which is why I’m failing to articulate them. But what I do know, is that I’m very glad my friend brought me to this museum on this day, because I think this has impacted my life’s trajectory more than if I had chosen some random museum on some random day. It’s like Dan said about his flight running into that flock of birds: timing is everything; a few minutes sooner or later and everything about his life would look completely different. Perspective is like that; it only appears when something perfectly-timed happens. And the perspective I gained from this serendipitous event, is that wasting time is not an option.