How To Waste Your Life

Okay, before all of the backlash starts that I will inevitably get from this post, let me begin by saying I fully respect your right to disagree with me. However, disagreement and disrespect are two very different things, so please keep that in mind before you respond. When it comes down to it, that is really what all of our societal issues boil down to: disagreement versus disrespect.

I am a Christian. I attend church every weekend; I volunteer throughout the week; I have a passion for writing about my faith, and I aspire to be an author and speaker in the Christian community.

I also support the SCOTUS decision.

We live in the United States. We have the freedom to speak, vote, assemble, bear arms, the list goes on. I could sit here all day and build a compelling argument about the politics behind this decision, but the audience looking for that argument is not who I’m seeking to convince.

I’m looking for those sitting in church pews right now, heartbroken, feeling betrayed, and asking God “why?” as if there was another massacre happening in cold blood.

I’m also looking for everyone who read that last sentence and threw a fist in the air with an enthusiastic “yeah!” because they’re looking for someone to stick-it to “those damn pushy Christians.”

With that in mind, here are three points I think are necessary to consider before either side starts throwing punches.

For the Christians, remember who our God is and what He stands for. For non-Christians, please don’t judge us by our outliers who have judged you. You’re right, it’s not a fair thing to ask, but don’t advocate hatred of Christians the same way homosexuals, African-Americans, women, and so many other people-groups have been discriminated against simply because we have differences. 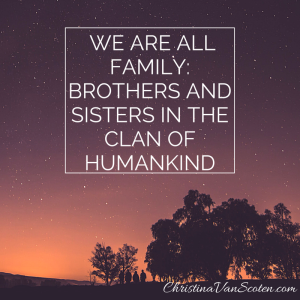 1. God gave us free choice. From the very beginning, God allowed us to make our own decisions, good or bad. Adam and Eve were the original sinners; did God stop loving them? No. Their circumstances changed, but they still held a relationship with God and were reunited with Him. Story of our lives.

If God wanted a planet full of mindless zombie-followers, He could have absolutely made us that way. Instead, He wanted us to choose to be in relationship with Him. He knows, as most parents do, that sometimes we need to make our own choices to grow into better people. Growth, as a person and a country, only comes through experience.

Christians tend to look at this decision as an affront to the faith, but it does not have any affect on our God-given ability of choice. This ruling does not nullify anyone’s ability to seek and meet God; thinking it does means doubting God’s ability to work in our hearts.

2. Legislating Christian-morality is not the same as legislating morality. There is a base level of morals that (generally) all humans adhere to. Murder-bad. Slavery-bad. Freedom-good. I think we can all agree on this.

Do you see the distinguishing factor? Matters we can clearly say are bad, are the things that takes away someone else’s choice. Murder and slavery are one person making decisions that adversely affect someone else. The secondary person has no choice in their fate because someone else is deciding it for them. The matters we know are clearly good, are when people have the option to make decisions for themselves.

Then there’s miles of grey area: pre-marital sex, smoking, abortion, drinking, cloning, fighting, etc. There’s an infinite list of issues that are fine to some people and not to others; there’s items that in moderation or at a certain age are fine, but we deem bad beforehand.

Here’s where our Christian-morality takes over. As well-meaning as we may be, we take things a step too far by trying to stop others from doing what we see as wrong. If we remember that we agreed freedom is good on a fundamental level, we might realize that we are taking that very freedom away by not allowing others to make the choices we disagree with. Doesn’t that follow the exact logic of what we agreed was bad?

3. Our greatest calling is to love. Jesus tell us to love our neighbors like ourselves. His entire ministry was grounded in love; so much love that He gave His life for ours. Yet, instead of following His footsteps and loving like He did, like He called us to, we have fallen into the trap of spreading hatred because people do not instantly agree with us and our beliefs.

Yes, Jesus said He would bring division in families. He said He did not come to spread peace (Luke 12:51-53), but He did come to spread love. You don’t have to agree with homosexual relationships; it may be something that has broken up your family; but that doesn’t mean you can’t love like Jesus loved.

Did you catch that? Like Jesus loved. He did not condemn; He did not fight for legislature; He did not plead with people to change their minds. He laid out what He stood for, said take me or leave me, and trusted God to work in their hearts.

We try so desperately to debate, guilt, or manipulate people into agreement and we wonder why they’re not interested in our faith. I wouldn’t be interested in Jesus if He was a bully either, but sadly that’s how we represent Him. 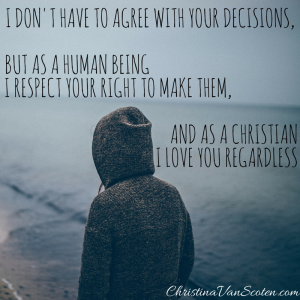 Maybe you’re upset with me for not yelling from the top of my lungs that the SCOTUS decision is wrong–that people don’t need more excuses to live a lifestyle you don’t agree with because it’s sinful. But who am I to ever say that? I’m part of the human race. I’m flawed by default, which means I’ve sinned in the past and I will in the future. We are all united in that.

If I have the freedom to follow my God and do what I believe He calls me to do, who am I to take away someone else’s God-given ability to make choices, whether in religion, marriage partners, or hanging a confederate flag. I don’t have to agree with your decisions, but as a human being I respect your right to make them, and as a Christian I love you regardless.

Getting into a screaming match over which sins are worse than others does nothing but make you lose your voice. I don’t know about you, but I’d rather use my voice to spread love like Jesus. God can handle the rest.

“So now I am giving you a new commandment: Love each other. Just as I have loved you, you should love each other. Your love for one another will prove to the world that you are my disciples.” John 13:34-35